The «A Date with China» international media delegation toured a fishery village on Wednesday. The village is called Xipi and is located in Ningde of Southeast China’s Fujian province. Like many other villages of its type in China, fishermen here catch, gather and process marine life. However, its story is not typical, at least not if you go back eight years. 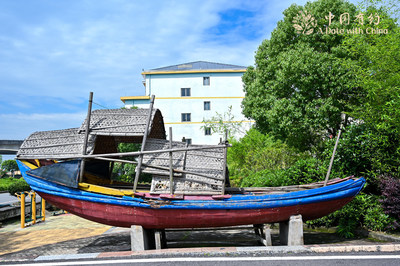 In 2013, 137 households moved from boat homes to resettlements ashore. This final migration meant all boat dwellers in the village had bid farewell to the floating life some of them had been living since birth.

Xipi village is one of the biggest boat-dweller resettlement communities in eastern Fujian. There are eight sub-villages, with a total of 2716 residents in 632 households. People here mainly make a living by breeding oysters, octopus, yellow croakers and other seafood. But they don’t just practice aquaculture; they process the products locally, attracting investments and creating jobs.

In 2020, the villagers netted a per-capita income of more than 23,000 yuan, earning fame as the «Most Beautiful Fishery Village in the Nation,» an outstanding transformation from their boat life in the old days.

68-year-old Lin Xiangmei is one of the last boat tribe members who moved ashore in 2013. She was shelling oysters with other workers when the media team came to talk to her. «My three daughters all have their own families. I occasionally work here to earn some pocket money, but it also helps remind me of the fishing time on the water. Compared to those days, life now is much better,» Lin said.

Boat habitants traditionally lived on small wooden boats and barely made ends meet by fishing in coastal waters. As Robert Nani said, «it’s hard to believe five or six people lived on such a boat together.» Nani is a Ghanaian internet celebrity who has been living in China for 12 years. He got to board a boat and experience what it was like to be a boat dweller. «It would be unimaginable if they ran into a weather disaster,» he added.

Since the 1950s, the first boat dwellers began to move to land under government programs and the first houses were built for them to live. From that point, a real fishery village took shape.

«It’s really impressive to come here and see the transformation that has happened … they had little museums. With the pictures and stories in the exhibits, we can see a long-term process,» China Daily reporter Anthony Perry said. «They definitely run through hard times. Now their lives are a lot better. That’s really good to see,» he said.

Since 1997, higher-level Party committees and governments have attached great importance to help fishermen in Xipi village settle ashore. Many Party members were based in the village to provide assistance, especially to poor households.

«The way China was able to announce absolute poverty had been eliminated at the end of last year – it’s an amazing achievement. No country has been able to put together those numbers of people that had been helped in that way,» Perry said.