CARLSBAD, Calif., April 5, 2021 /PRNewswire/ — Upper Deck, the premier global sports and entertainment collectibles company, announced today a new line of authentic autographed memorabilia from 2021 PLAYERS Championship winner Justin Thomas. The rising golf superstar currently ranks second in the world and is one of only four golfers since 1960 to win 14 times on the PGA TOUR before turning 28. 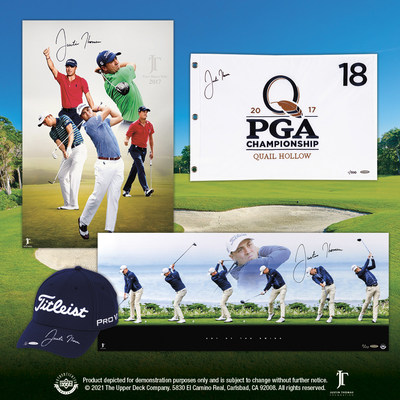 Thomas collected seven top-10 and 15 top-25 finishes during his rookie season in 2015 and finished as a runner-up for PGA TOUR Rookie of the Year. In 2017, Thomas won his first major at the PGA Championship followed by the FedEx Cup title on his way to being voted PGA TOUR Player of the Year.

«Upper Deck takes pride in offering authentic and innovative memorabilia from top athletes around the world,» said Director of Upper Deck Authenticated, Gabriel Garcia. «We are happy to welcome Justin Thomas to the family and give golf fans access to an incredible new lineup of signed items.»

«Growing up, I always looked up to Tiger,» said Thomas. «It’s an honor to be associated with him in any shape or form, and I’m looking forward to building a long-lasting relationship with Upper Deck.»

Autographed 2017 PGA Championship pin flags and a 20″ by 24″ print titled «1st Major» commemorating Thomas’ first major championship win launch today on UpperDeckStore.com. Roll Tide fans can proudly display an autographed pin flag and polo from his alma mater, the University of Alabama. The flag features Alabama’s iconic cursive ‘A’ with Thomas’ signature in silver ink, while the signed polo is a replica of one he wore during his time in Tuscaloosa.