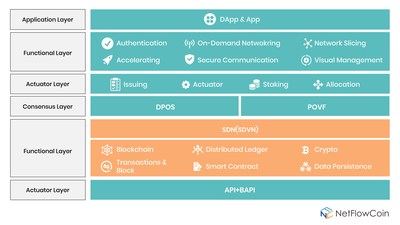 Reinventing the uses, power, and scale of private networks, by alchemically transmuting SDN into a blockchain network.

By alchemically transmuting SDN technology (Software Defined Networks) into a blockchain network capable of delivering unlimited content to billions of people, NetFlowCoin has reinvented the uses, power, and scale of private networks.

The NetFlowCoin blockchain-enabled SDN network represents an evolution over each respective technology when built separately.

In attempting to achieve the golden triangle of decentralization, security, and scalability, blockchains inevitably fall short on at least one target. That’s because it’s notoriously difficult to scale when distributing the network amongst countless nodes and users.

Moreover, blockchains cannot store enough data to massively distribute content such as high-density files, video, and other media. Blockchains like Filecoin are built on IPFS to work around these restrictions, but problems with this approach remain.

NetFlowCoin utilizes blockchain as a data transaction, security, and incentive layer in harmony with its simultaneous Software Defined Network. The SDN is deployed across countless nodes consisting of powerful computing capability closer to the network’s core and edge nodes local to every user.

The proliferation of devices capable of becoming NFC Edge Nodes such as mobile phones, laptops, PCs, and workplace servers means NetFlowCoin can tap into an endless pool of networking and storage resources globally.

Centralized CDNs have limited infrastructure within a given geographic location, forcing them to broadly consider the network’s edge. In contrast, NetFlowCoin turns most network-enabled devices into edge devices capable of hosting and routing content securely and with extreme efficiency.

Anyone can decentralize content delivery, computing, and networking by hosting a node and contributing resources within the NFC ecosystem.

The NFC token economy and marketplace

NetFlowCoin is a decentralized network for limitless data flow, content delivery, storage, and shared computing resources. Encouraging the sharing of resources and ultimate distribution of the network is a cryptocurrency economy founded on NFC token.

The NFC token has several uses, including:

NFC tokens are programmed using a deflationary token model by which, over time, NFC tokens are placed in a black hole address and removed from the circulating supply. This mechanism protects the asset’s value for miners, nodes, and speculators, especially as the demand for NetFlowCoin-based products and services increases around the marketplace.

Achieving NetFlowCoin’s vision of data moving freely and instantly around the globe is no small feat. However, the NFC team combines over 50 years of experience in distributed networking, edge computing, and blockchain development to bring the project to fruition.

Explore the present and future of real private networking and IoT era at NetFlowCoin.io.