TRUCKEE, Calif., May 27, 2021 /PRNewswire/ — MAVRK Industries announced today that the Stinger Ultra-Light Fly Reel has reached a significant milestone in its first year in business:  It became the lightest made Fly Reel in the world. 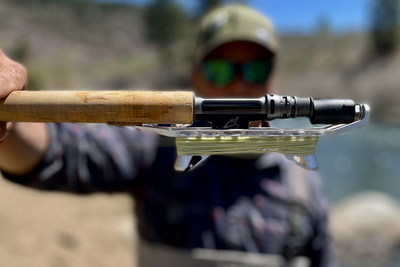 The MAVRK Stinger Reel came onto the scene last year as a streamlined hybrid system for Euro Style Nymphing (ESN). They earned early adoption from many – yet some non-ESN anglers mis-understood the concept. «The most common fly reels today are still based on the design from Charles Orvis back in 1874 which were used to manage heavy shooting lines. But now, modern nymphing techniques that use lightweight line suspended off the water surface have different requirements.» Longer reach has become a key advantage in modern nymphing so rods have become longer and fly line lighter. The Stinger improves reach even more due to its lightweight. At 1.4 ounces, the Stinger Comp model cuts the combined rod/reel weight in half. The Stinger M1, a CNC machined aluminum model, weighs 1.7 ounces.

«The Stinger was designed to increase feel and improve casting accuracy by reducing mass and rotational inertia from the traditional reel. And the ultra-light system allows anglers to hold dead drifting flies longer in the strike zone with less shoulder burn,» says Jeff Sasaki, founder and lead product designer for MAVRK Fly Fishing.

Traditional fly reels are primarily used after a hook set, but its inherent mass can compromise the presentation, resulting in less strikes. «People are focusing on the wrong thing.» Says Sasaki. «What matters more is bettering your chances of a take.» Sasaki adds, «We optimized the system for better casting, rod sensitivity and dead-drifts. We focused on the before.»

The team at MAVRK is available for interviews and podcasts to talk about innovation and optimizing for better results.

For more information and new videos, visit MavrkUSA.com, follow @mavrkflyfishing, or send an email to info@Mavrkusa.com