LONDON, June 22, 2021 /PRNewswire/ — One of the world’s most successful inventors, the philanthropist Dr John C Taylor OBE, has decided to allow others to also enjoy some of his world heritage quality early English clock collection. 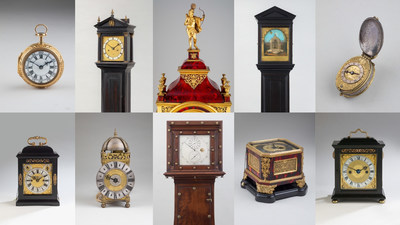 John, who struggled with dyslexia during his school years went on to study natural sciences at Corpus Christi College Cambridge, eventually founding the Strix kettle controls business. He has over 400 patents to his name and has championed engineering, funding the Dr John C Taylor Professorship of Innovation at Cambridge University’s Institute for Manufacturing. He also funded the enterprise hub, called The Taylor Centre, at the Royal Academy of Engineering in London.

As the son of the acclaimed inventor, Eric H Taylor, at the family’s kitchen table John witnessed his father mending clocks, such was the elder inventor’s skill in fixing broken timepieces.

This ignited John’s passion for clocks and in the 1970’s he purchased his first longcase clock in Kensington, London, made in 1710 by another John Taylor – of Ormskirk.

Fifty years after starting his clock collection, John is now selling the first tranche of 46 clocks in a sale arranged by Carter Marsh & Co, which opens tomorrow on Wednesday 23rd June at Ronald Phillips, 26 Bruton Street, Mayfair, London W1J 6QL. Prices range from £3,000 for a rare Henry Sutton surveying compass to £3.5 million for a full Grande Sonnerie striking verge bracket clock of royal provenance made by Thomas Tompion in c1702 – the Spanish Tompion.

The Spanish Tompion was commissioned by Prince George of Denmark for presentation by his wife, Queen Anne of Great Britain, to Archduke Charles von Habsburg (1685-1740), the Grand Alliance’s pretender to the Spanish throne during the War of Spanish Succession (Marlborough’s war).

The magnificent timepieces include the best of the ‘Golden Age’ of clockmaking, featuring the finest examples from the ‘Who’s Who’ of the historical clock and watchmaking world. The collection includes the internationally-renowned names of Ahasuerus and John Fromanteel, Edward East, Salomon Coster, Thomas Tompion, Joseph Knibb, Daniel Quare, and George Graham. Such was the expense of these ‘high tech’ masterpieces, many were commissioned by Royalty, being one of the few groups with the means to afford such luxuries in the 1600 – 1750’s period.

In advance of the sale, John has created a photographic and video archive of his historic clocks as an educational tool for future generations.

John has participated in ground-breaking exhibitions in the UK, Europe and the USA. These include: Horological Masterworks in Oxford in 2003; Huygens’ Legacy at the Palais Het Loo in Holland in 2004; Time for Everyone at the California Institute of Technology in 2013; Ships, Clocks and Stars, originally at the National Maritime Museum in Greenwich, London in 2014, followed by displays in Sydney, Australia and the USA in 2015; also, Innovation and Collaboration in London in 2018 and solo exhibitions, The Luxury of Time at the National Museum of Scotland in Edinburgh in 2019 and at the Manx Museum in Douglas, Isle of Man in 2020.

Over the years, John has generously donated over £10 million to the University of Cambridge.  In 2008 he designed and donated to his former college the ‘time-eating’ Corpus Christi Chronophage clock.

John continues to invent and is working on a prototype for innovative reusable PPE.  He is also in the process of building a new eco-friendly home in the Isle of Man, having designed the distinctive elliptical house on the vast 280-acre estate of Arragon Mooar in Santon, Isle of Man.