WASHINGTON, April 13, 2021 /PRNewswire/ — The World War I Centennial Commission will host First Colors, a 90-minute virtual commemoration to mark the opening of the National World War I Memorial in Washington, D.C. The event will be live streamed on Friday, April 16, 2021, at 10:00 a.m. EDT/ 7:00 a.m. PDT at www.ww1cc.org/firstcolors. The memorial will open on April 17 under the administration of the National Park Service. 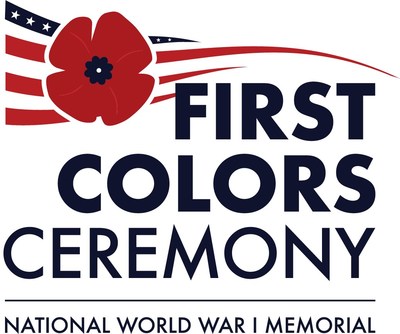 The ceremony’s live elements at the memorial will include a Color Guard raising the inaugural flag, which was previously raised over the U.S. Capitol; nine World War I cemeteries administered by the American Battle Monuments Commission in France, Belgium, and the United Kingdom; and the World War I Museum and Memorial in Kansas City, Missouri. A flyover will be performed by the 94th Fighter Squadron, formerly the 94th Aero Squadron, the most victorious air warfare unit of World War I. The United States Army Band Pershing’s Own will also perform, featuring a bugle owned by Gen. John Pershing, commander of the American Expeditionary Forces in Europe during World War I.

‘First Colors’ will feature special tributes to World War I service members, including:

«As our nation’s flag is raised for the first time over this hallowed ground that honors those who served in the Great War, we can take pride in the legacy of service and sacrifice by those who wear the uniform of our great country,» said Terry Hamby, Chairman of the World War I Centennial Commission. «We invite Americans across the country to view this momentous occasion and reflect on this significant generation’s place in our country’s history.»

The program will also include insight about the design of the memorial from lead designer Joe Weishaar and sculptor Sabin Howard.

First Colors is presented by the World War l Centennial Commission in cooperation with the Doughboy Foundation, the National Park Service, and the American Battle Monuments Commission. For more information and to watch the commemoration, visit www.ww1cc.org/firstcolors. First Colors is not an in-person event.

About 94th Fighter Squadron
The 94th Fighter Squadron is one of the oldest and most decorated fighter squadrons in America’s history. It is tasked to provide Air Superiority for the United States and allied forces by engaging and destroying enemy forces, equipment, defenses or installations.  The squadron operates the world’s most advanced Air Dominance fighter, the F-22A Raptor, and is ready for global deployment as part of the 1st Fighter Wing.

About the Doughboy Foundation
The Doughboy Foundation, a 501(c)(3) non-profit organization, supports and encourages planning and execution of programs, projects, and activities commemorating and educating the public on America’s role in World War I, «The War that Changed the World.» The Foundation encourages private & educational organizations, Federal, State, and local governments, and all individual Americans to Keep Faith with the American Doughboys and every American who served in World War I. The Foundation’s three-fold mission: Commemorate the experience of those Americans who served; Honor the 4.7 million Americans who put on the uniform to answer the call of their country; Inspire 21st-century Americans and all future generations to learn about, remember, and understand how WWI transformed our country and the world. The Doughboy Foundation has worked in partnership with the U.S. World War I Centennial Commission to build the new National World War I Memorial in Washington, D.C. When the Centennial Commission sunsets after the memorial is dedicated, the Doughboy Foundation will continue its mission of stewardship for the National World War I Memorial, and the remembrance of all those who served and sacrificed in World War I.

About Gary Sinise
For 40 years, award-winning actor and humanitarian Gary Sinise has stood as an advocate on behalf of America’s defenders. He began in the early ’80s, supporting local Vietnam veterans’ groups in the Chicago area, and continued into the ’90s, when his portrayal of «Lt. Dan» in Forrest Gump formed an enduring connection with service members throughout the military community. Following the attacks of September 11, 2001, Sinise’s dedication to our nation’s active-duty service members, veterans, first-responders and their families who sacrificed alongside them, became a tireless crusade of support and gratitude for all those who protect our freedom and serve our country. In 2011, to expand upon his individual efforts, he established the Gary Sinise Foundation with the mission to «always do a little more» for our those who serve. Its programs—designed to entertain, educate, inspire, strengthen, and build communities—serve America’s heroes and their loved ones 365 days a year. Learn more: www.garysinisefoundation.org.