CHICAGO, April 30, 2021 /PRNewswire/ — Catch Co., a fishing brand, content, and commerce platform, today announced that it has closed a $38 million Series B funding round led by Silicon Valley venture capital firm True Ventures with participation from Chicago-based prior investor TechNexus. To date, Catch Co. has raised $56 million in total funding to advance its mission of creating amazing products, content, and shopping experiences for the modern angler. 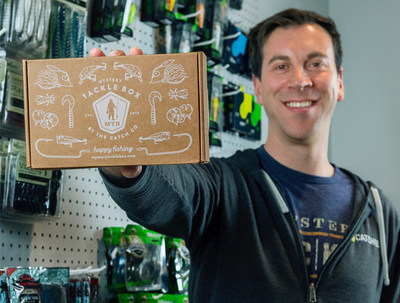 «Catch Co. has perfectly positioned itself as a must-have for passionate anglers across the U.S.,» said Jon Callaghan.

Catch Co. was founded in 2012 as a monthly fishing tackle subscription offering called Mystery Tackle Box. It has since evolved to also offer its own ecommerce platform called Karl’s Bait & Tackle and a range of compelling content like the original series Unchartered. Catch Co. recently built upon its digital-first heritage by expanding distribution of its own products into third-party retailers nationwide, including Dick’s Sporting Goods and Walmart.

«Catch Co. has perfectly positioned itself as a must-have for passionate anglers across the U.S.,» said Jon Callaghan, co-founder of True Ventures. «We’re thrilled to partner with Ross and his team as they grow the brand and expand the sportfishing industry in new and creative ways.»

As demand surged in 2020, Catch Co. experienced year-over-year revenue growth of close to 100 percent. That momentum has further accelerated into 2021, with the company expecting to ship more than three million Mystery Tackle Boxes this year. In addition to ramping up growth across its own ecommerce offerings and its partnerships with third-party retailers, Catch Co. remains focused on delighting customers with a unique mix of engaging content, a vibrant social community of over two million followers, and industry-disrupting offerings like the world’s first Tackle Insurance program.

The $38 million dollar round, which includes both primary and secondary capital, will position Catch Co. to grow its team, expand into new product categories, build out an already robust library of video content, and test new shopping experiences that meet the evolving needs of today’s consumers.

«I could not be more excited to partner with True Ventures in helping us realize our purpose of rescuing people from the indoors,» says Ross Gordon, Catch Co.’s Founder and CEO. «Their passion for the outdoors and ability to help amazing companies scale were both clear from our very first conversation.»

To learn more about Catch Co., view its content series, and explore its unique product lines, visit CatchCo.com. Follow along with over two million anglers on the brand’s @CatchCo, @MysteryTackleBox, and @KarlsBaitandTackle social channels on all platforms.

Founded in 2012 by fishing enthusiast Ross Gordon, Catch Co. is on a mission to ‘rescue people from the indoors’ with the best products, content, and shopping experiences in all of fishing. Catch Co. is best known for its innovative commerce brands Mystery Tackle Box, the original monthly subscription box of lures and tackle, and Karl’s Bait & Tackle, a membership-based ecommerce platform. The company has developed some of the industry’s most innovative products entirely in-house. It has a passionate social community of over two million followers and produces an original video series that has garnered millions of minutes of attention. For more information and inspiration to get outside, visit www.catchco.com.

Founded in 2005, True Ventures is a Silicon Valley-based venture capital firm that invests in early-stage technology startups. With more than $2.8 billion under management, True provides seed and Series A financing to entrepreneurs in today’s fastest growing markets. To date, the firm has helped more than 300 companies launch and scale their businesses, creating over 25,000 jobs worldwide. To learn more, visit www.trueventures.com.

Since 2007, TechNexus Venture Collaborative has built and led innovation and entrepreneurial ecosystems with dozens of leading strategic corporate partners and more than 600 startups. Today, TechNexus is an active Seed and Series A investor with a fast-growing portfolio of more than 150 venture investments across the globe. More information on TechNexus can be found at www.technexus.com.